Ministers to collaborate on clean growth, development of natural resources and competitiveness

SAINT ANDREWS (GNB) – Advancing environmental stewardship and economic prosperity was front and centre as discussions focused on clean growth at the Energy and Mines Ministers’ Conference in Saint Andrews, Aug. 13-15.

"Our discussions in Saint Andrews are laying the foundation so we can benefit from the opportunities that lie ahead,” said Energy and Resource Development Minister Rick Doucet. “It is clear that Canada’s leadership in the energy and mining sectors depends on collaborative action by government, industry, indigenous communities and stakeholders at large. New Brunswick is embracing responsible development of our resources and the adoption of cleaner energy options to help create jobs and grow our economy.”

A low-carbon economy is meant to help advance Canada’s efforts to create the best path to well-paying, long-term jobs, healthy communities and sustainable economic growth. Ensuring Canadian businesses remain competitive in the global market, particularly in extractive industries, was a focus of the discussion. The ministers said, by working together, Canadians can leverage technology and innovation to seize new export and trade opportunities, creating new opportunities for Canadian businesses not only to maintain, but to enhance competitiveness in the energy and mining sectors. The ministers also discussed the importance of market access and the oil sector in supporting the transition to a cleaner economy.

“Canada has made significant strides in creating good, middle-class jobs in the clean-growth economy,” said federal Natural Resources Minister Jim Carr. “We are committed to our nation-to-nation relationship with indigenous peoples and to working with provinces and territories to ensure a smooth transition to a low-carbon future. Canada is a leader in responsible resource development and is demonstrating a sustainable, competitive, clean-growth economy, making future generations proud.”

The ministers said that Canada’s future will rely heavily on the way governments assess and guide the development of major resource projects; respect the rights of indigenous peoples; engage with communities; earn the trust of Canadians; and ensure that Canada is a global leader in clean energy and technology and innovation. To these ends, ministers discussed progress and next steps on the federal review of environmental and regulatory processes. They also said that advancing sectoral adoption of clean technologies will enable energy and mining companies to achieve and sustain world-class environmental performance.

To further support the common goal of clean growth while respecting the roles and responsibilities of each government, the ministers agreed to:

Ministers also reflected on progress made in the last year, including their work on:

Ministers committed to work together to develop a new Canadian minerals and metals plan to help position Canada as the leading mining nation and to lay the foundation for lasting success at home and abroad. The Quebec government has agreed to examine the feasibility of participating in the development of this plan, taking into consideration its circumstances. This will be a shared vision developed with federal, provincial, and territorial ministers, indigenous peoples, industry and stakeholders. This will also include an investment strategy for Canada’s minerals and metals industry.

The five-year renewal of the Intergovernmental Geoscience Accord was highlighted by participating ministers as an example of collaboration among different orders of government. The accord defines the roles and responsibilities of participating federal, provincial and territorial government geoscience agencies and establishes mechanisms for generating, disseminating and sharing geoscience information. They also highlighted the importance of increasing indigenous partnership and collaboration and incorporating traditional knowledge in the expansion of publicly available geoscience data.

The ministers also emphasized the importance of considering the diverse perspectives of all Canadians in the development and regulation of natural resources. This was illustrated by discussions with indigenous leaders, a panel session on women in natural resources, and the participation of youth representatives in the open sessions. During the conference, ministers discussed additional ways to move toward a more inclusive natural resources sector, to ensure growth and competitiveness

Energy and mines industry associations met with the ministers to present challenges and opportunities associated with the transition to a low-carbon economy and a more innovative natural resources sector. Industry groups provided recommendations on issues, including efficient regulatory regimes and enhanced competitiveness, Canada-United States relations, indigenous partnership and consultation throughout the development, approval, construction and operation of energy and mining projects.

Building on last year’s work to earn greater public confidence in major resource projects, the ministers announced the publication of the common principles for engagement and participation in energy and mineral development, as well as a fact sheet highlighting governments’ efforts to strengthen the public confidence in how Canada’s natural resources are developed.

The ministers emphasized the important role that natural resources play in Canada’s economy, particularly in northern and remote communities, noting that in 2016 the natural resource sectors directly and indirectly accounted for 16 per cent of Canada’s GDP and about 1.7 million jobs. The ministers said natural resource development provides a wealth of socio-economic benefits to Canadians, from investments in infrastructure to education and skills training. The ministers also reaffirmed their commitment to openness and transparency by releasing the major projects summary report, which indicates that there are 471 major natural resource projects under construction or planned over the next 10 years, representing $684 billion in potential investment.

The ministers will meet again in the summer of 2018 in Nunavut.

More information on the Energy and Mines Ministers’ Conference is available online. 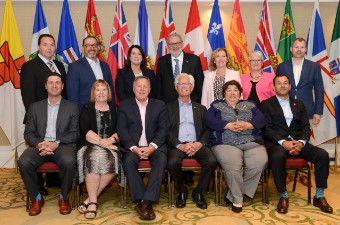