FREDERICTON (GNB) – Premier Blaine Higgs will meet on Friday with Louise Mushikiwabo, the secretary general of the International Organization of La Francophonie. The meeting is part of her official visit to Canada from May 9 to 14.

“I look forward to welcoming the secretary general on this historic first visit to New Brunswick,” said Higgs. “This high-level visit demonstrates our province's active role internationally and its expertise and leadership in the areas of youth, education and job training.”

Minister responsible for La Francophonie Glen Savoie and Education and Early Childhood Development Minister Dominic Cardy will also participate in the meeting, which will provide an opportunity to discuss common priorities.

“We are pleased with the efforts to transform and modernize the International Organization of La Francophonie and I salute the efforts of the secretary general to build an ever more effective, relevant and transparent Francophonie,” said Savoie.

During her visit, Mushikiwabo will meet with Lt.-Gov. Brenda Murphy and Tourism, Heritage and Culture Minister Tammy Scott-Wallace, who is also minister responsible for women's equality, to discuss women's equality in the Francophonie, as well as with representatives of the province's civil society. Mushikiwabo will speak on Saturday, May 14, at the annual general meeting of the Fédération des jeunes francophones du Nouveau-Brunswick.

The Government of New Brunswick has been a member of the International Organization of La Francophonie since 1977. This membership allows the province to promote its potential and expertise internationally in a variety of areas such as the economy, education, professional training, culture and sports. 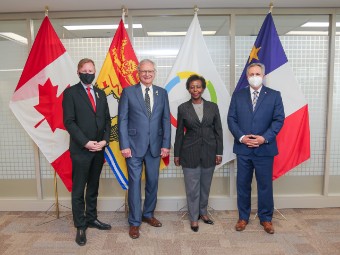