The New Brunswick Lotteries and Gaming Corporation (NBLGC) was established on June 26, 2008. The NBLGC is a Crown corporation governed by the Gaming Control Act that is responsible for developing, organizing, conducting and managing provincial lottery and gaming activities on behalf of the Province.

The business and affairs of the NBLGC are administered by a four-person Board of directors which consist of the Minister of Finance and Treasury Board, the Deputy Minister of Finance and Treasury Board and two senior civil servants appointed by the Lieutenant-Governor in Council. The Gaming Control Act requires that one of the appointed be a senior official from the Department of Health. The NBLGC, through its board, is ultimately accountable to the Government of New Brunswick.

The current board of directors are: 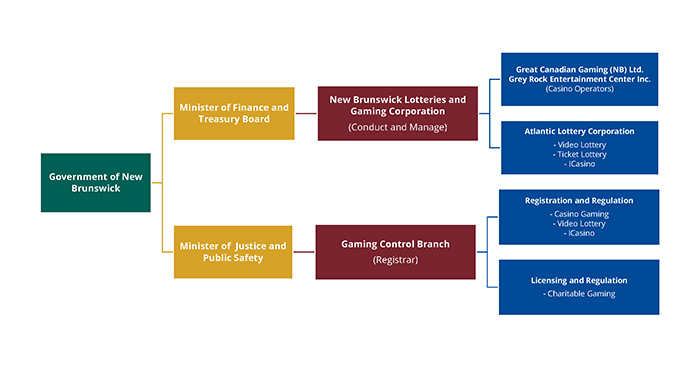 To ensure that gaming in New Brunswick is conducted with a focus on responsible management, responsible play in a responsible environment, and that provincial gaming revenue is derived from gaming activities that are conducted responsibly and with integrity.

Gaming in Canada is governed by the Criminal Code of Canada. Under that statute, generally speaking, gambling is unlawful unless conducted and managed by the Province (or a body authorized by the Province to license gaming on its behalf) or licensed by a provincial governement.

In 1976, the New Brunswick Lotteries Act established the Lotteries Commission of New Brunswick as a crown corporation and charged it with the responsibility to “develop, organize, undertake, conduct and manage lottery schemes on behalf of the Government of the Province…”. With approval of the Lieutenant-Governor in Council, the commission was also authorized to enter into agreements with other provinces for the same purposes.

Under the new Gaming Control Act, the former Lotteries Commission of New Brunswick was transformed into two entities.

The separation of duties between the Province's conduct and manage responsibilities and the regulation of gaming was critical step to improving the accountability and transparency of gaming control in New Brunswick.