Provincial purchase of salt from local mine will create new jobs

SUSSEX (GNB) – The provincial government announced today an agreement to buy its supply of road salt from the Nutrien mine in Sussex, a decision that will support 50 mining jobs and generate economic spinoffs in the region.

“This agreement will put local companies first, grow our economy and support New Brunswick workers,” said Sussex-Fundy-St. Martins MLA Bruce Northrup. “I am very proud that this fall, the salt applied to provincially-managed roads will once again be sourced right here in New Brunswick.”

By entering into this agreement, the provincial government has ensured the continued operation of the mine in Sussex.

The mine currently employs 34 workers to maintain the facility and undertake decommission tasks. The workforce will increase to 50 to support the two-year supply agreement.

Decommissioning of Nutrien’s potash operations will continue as planned.

“This agreement demonstrates how serious we are about supporting regional resource development,” said Energy and Resource Minister Mike Holland. “It is important to the economy of New Brunswick that we put our own resources to good use by accessing an operation that is already in place.”

On average, the province purchases about 180,000 tonnes of road salt per year. For the past two years, the road salt used by the province has been outsourced from Nova Scotia and Quebec. The agreement is not expected to result in a change to the price of salt.

“We are happy to have found a way to keep employment within this community, and we thank the provincial government for their hard work to help us make this happen,” said Doug Doney, general manager of Nutrien’s operations in New Brunswick.

Other salt users including municipalities, schools, hospitals, and private operators of Route 1 and Route 2 may purchase salt through the government’s contract.

The average annual salary in New Brunswick for non-metallic mineral mining and quarrying is just over $80,000. It is estimated the increased payroll will generate around $685,000 in personal income taxes and other taxes payable to the province.

Local and provincial businesses will benefit from the injection of purchasing power from an incremental payroll of close to $3 million. 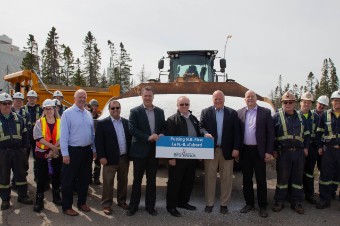