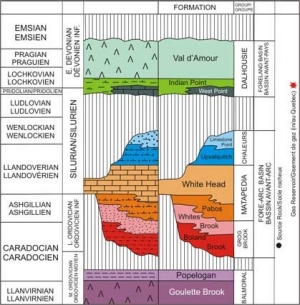 The Matapedia Basin is a large, (mainly) marine, composite (two-part) successor basin that extends through central Maine, northwestern New Brunswick and Gaspé Peninsula. In New Brunswick the older part of the Matapedia Basin has been called a fore-arc basin, which developed during extension following the formation of the island arc represented by the Goulette Brook Formation. The younger part of the Matapedia Basin is a foreland basin interpreted to have formed in front of a northwest migrating Acadian orogenic wedge. The fore-arc basin fill comprises three groups: (1) the Upper Ordovician Grog Brook Group clastic turbidites, (2) the Upper Ordovician to Lower Silurian Matapedia Group continental slope calcareous sandstones and calcilutites, and (3) the Silurian Chaleurs Group comprising a varied suite of slope clastics and shelf calcareous clastics, carbonate reefs, and lesser felsic and mafic volcanic flows and tuffs. The foreland basin fill is represented by the Dalhousie Group, which comprises a regressive sequence comprising early shelf clastics and carbonates overlain by marine and terrestrial volcanics and minor clastics. 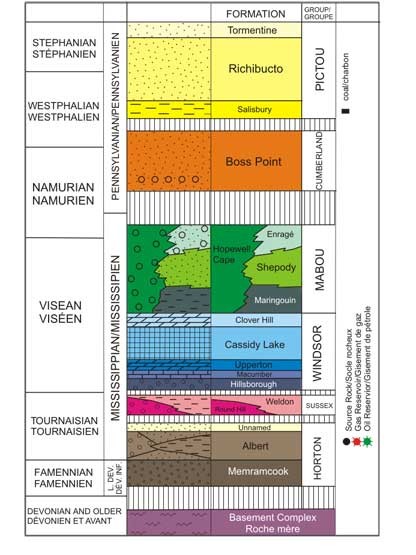 The Maritimes Basin of eastern Canada formed as a successor basin following the Devonian Acadian Orogeny. Basin fill is regionally divisible into two parts, which are separated by a basin-wide Namurian unconformity. Below the unconformity the fill comprises a basal alluvial-lacustrine succession (Horton Group), overlain by a terrestrial red-bed clastic succession (Sussex Group), a mainly marine mixed clastic-carbonate-evaporite sequence (Windsor Group), and another terrestrial redbed succession (Mabou Group). Horton to Mabou strata are interpreted to fill a complex system of subbasins that collectively evolved in a transtensional-transpressional setting. Local unconformities within the Horton Group, between the Horton and Sussex groups, and between the Windsor and Mabou groups may reflect alternations between tensional and compressional regimes. Above the Namurian unconformity, the fluvial floodplain- mire successions of the Cumberland and Pictou groups are interpreted to be infilling a thermal subsidence or sag basin.

Two deep subbasins in southeastern New Brunswick, the Moncton Subbasin (3700 km2) and the Sackville Subbasin (800 km2), form part of the Maritimes Basin complex. The presence of hydrocarbons in the Moncton Subbasin has been known for 150 years. In the late 1800's limited quantities of oil were taken from shallow wells in lacustrine sandstones of the Albert Formation (medial Horton Group) in the old Dover Field about 15 km southeast of Moncton. Just to the west, and on the same trend as Dover, natural gas and oil were discovered in 1909 at the Stoney Creek field. From the time of discovery until field closure in 1991, Stoney Creek produced about 800,000 barrels of oil and 30,000,000,000 cubic feet of sweet gas. There have been 59 wells drilled in the Moncton and Sackville subbasins between 1909 and 2000. Most of those wells were shallow and drilled on the basis of surface oil shows or poorly defined structures defined from geology or 2-D seismic profiles. No commercial success resulted from the drilling of these wells until the fall of 2000 when Corridor Resources Inc. and Potash Corporation of Saskatchewan Inc. made a major discovery of natural gas in the deep part of the Moncton Subbasin near Sussex. The discovery, called the McCully field, is again in lacustrine and fluvial sandstones of the Albert Formation. The field is under development (8 wells have been drilled) and has an estimated in-place resource of 1,000,000,000,000 cubic feet of sweet gas. 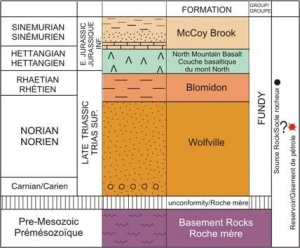 The Mesozoic Fundy Basin is largely untested. It has a halfgraben shape, with a hinge margin on the south and a more complex faulted boundary on the north. Mobil Oil Canada Limited from 1968 to 1973 and Chevron Standard Limited from 1980 to 1982 undertook more than 4600 km (2900 mi.) of marine 2-D seismic profiling. Nearly 4500 km of the migrated profiles are available in hard copy from either the New Brunswick or Nova Scotia government. Only two exploration wells have been drilled in the basin; both were greater than 2500 m (8200 ft.) deep and both were located just offshore in the Bay of Fundy in New Brunswick.

The deep borehole records and surface sections (mainly in Nova Scotia) indicate the sedimentary fill, called the Fundy Group, comprises terrestrial clastics and a thick basalt. The basal unit, the Wolfville Formation, is over 1 km thick and comprises large-scale cross-stratified feldspathic to very mature quartzose sandstones interpreted (at least in part) as aeolian dunes. The clean quartzose sands are considered to be excellent reservoir beds. The Wolfville is succeeded by the Blomidon Formation, which consists of up to 1.5 km of red shale and siltstone. If the Wolfville sands are anywhere charged, the regionally distributed and thick Blomidon shales should provide an excellent seal. The Blomidon is overlain by the 200-300 metre thick North Mountain Basalt, which in turn is succeeded by a variable thickness (0-250 metres) of red shale, sandstone, and minor limestone with associated jasper of the McCoy Brook Formation.