FREDERICTON (GNB) – A contingent of 85 athletes from New Brunswick will participate in the 2017 North American Indigenous Games, July 16-23, in Toronto.

“The North American Indigenous Games bring thousands of athletes together to celebrate indigenous culture and compete in a variety of traditional and non-traditional sports,” said Service New Brunswick Minister Ed Doherty, who is also the minister responsible for aboriginal affairs. “This is a wonderful opportunity for our First Nations youth to learn and interact with their peers from across the continent, while also sharing their own heritage and athletic abilities with the rest of the world. I congratulate the talented athletes who will be competing at this important international sporting event and wish them well at the upcoming games.”

The event for young people aged 13-19 is the largest sporting and cultural gathering of its kind, with more than 5,200 participants, 2,000 volunteers and many spectators and dignitaries expected to attend venues around the city.

“The 2017 version of Team New Brunswick is the best prepared, best organized and best equipped team we have sent to the games,” said Jason Peters, who is the team’s chief executive officer and chef de mission, as well as a council member for the Games. “We have worked extremely hard to select our best athletes, coaches, managers and mission staff to represent the Mi’kmaq and Wolastoq people. Our partnership with Nike Team Canada, Coach New Brunswick and the Province of New Brunswick has made this opportunity a reality.”

The North American Indigenous Games Council is a non-profit organization aimed at improving quality of life for indigenous peoples and representing indigenous distinctiveness.

The provincial government is providing $143,521 for New Brunswick’s participation at the Games.

Support for aboriginal athlete development recognizes calls to action as set out by the Truth and Reconciliation Commission of Canada. 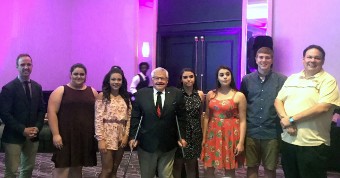