FREDERICTON (GNB) – Pokuhulakon Witsehkehsu: Sisters of the Drum brought the beat of First Nations music and song to the state of the province address this evening in Fredericton.

“It was exciting and empowering to have the group performing for us at such an important venue with the premier,” said Service New Brunswick Minister Ed Doherty, who is also minister responsible for Aboriginal Affairs. “To see these First Nations women drumming and singing together in a circle with such vibrant emotion sent a message to all of us to appreciate what we can do together for the benefit of our province.”

“Drums have been one of the common signals for calling people together,” said Krista Paul, founder of the all women Maliseet drumming group. “The drums are humanity's common pulse - they do not know about race, racism, jealousy, hate, resentment, greed, language, genders, gender choice, or human diversity. All that matters is the sound of one heart beating. The drum represents the heartbeat of mother earth and all people.”

Sisters of the Drum formed in the spring of 2016 at St. Mary’s First Nation but membership is open to women from different Maliseet communities in New Brunswick. Hand drummers, ranging in age from 14 to 40, gather weekly to immerse themselves in First Nations music and culture and connect with other women in their community.

The group performed the Wolastoq Song and the Warrior Woman Song at the invitation of the provincial government.

As the only women’s First Nations drum group in the Fredericton region, Sisters of the Drum has also performed at Take Back the Night, a march at Fredericton City Hall, and the Sisters in Spirit march, organized by St. Mary’s to raise awareness regarding violence against women. The group may also be called to drum at sacred ceremonies such as funerals, sweats, prayers, or powwows.

Paul said the circular shape of the drum represents interconnectedness to one another, while the drum’s cedar hoop and deer skin is indicative of First Nations connection to the land and animals. 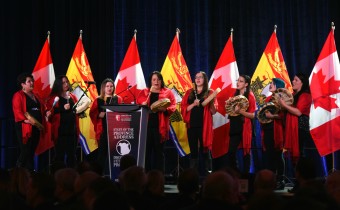